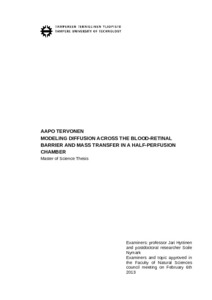 Retinal diseases, especially age-related macular degeneration (AMD), are becoming a large issue as life expectancy increases. Blood-retinal barrier (BRB) is located adjacent to the retina and has many important functions in normal vision and it is the main site associated with AMD pathogenesis. BRB consists of retinal pigment epithelium (RPE), Bruch's membrane (BrM) and choriocapillaris endothelium. Mathematical modeling provides a tool to study the properties of the BRB and thus new treatment options for AMD. In experimental research, the BRB barrier function is usually measured with a so-called diffusion chamber. In this thesis, two models are constructed: 1) a passive diffusion model across the BRB based on the physicochemical properties of the BRB (BRB model) and 2) a model of a miniaturized half-perfusion chamber concept to study the effects of different parameters to the functionality of the system (chamber model).
The predictive BRB model was constructed by combining physical theories from the literature to describe the hindered diffusion within a certain type of geometry. The main objectives were to construct the model, to study the behavior of the permeability of the whole BRB and its parts as a function of different molecular properties as well as to validate the model by using experimentally measured permeabilities. The chamber model was done by using finite element method (FEM) and by utilizing Comsol Multiphysics FEM modeling software. The main interest was on the effects of certain system dimensions and other chamber parameters to the error caused by the measurement system.
The results of the BRB model indicate that it predicts the correct magnitudes of the BRB permeabilities, but fails to predict the more accurate behavior based on the molecular properties of the diffusing molecule, such as molecular size and lipophilicity. As assumed, the model confirms that RPE forms the most significant barrier in the BRB, as the BrM has affects only the very lipophilic molecules. With the chamber model, the results show that the functionality of this kind of half-perfusion chamber is limited by the free diffusion rate. The chamber dimensions and other parameters are less significant, as they mainly just change the diffusion distances.
The proposed BRB model is the first model of this kind for the BRB. It can be utilized to study the barrier properties in normal function and in disease, especially with little refinements. There are several directions towards which the model can be taken in the future, such as dynamic regulation of the permeability. The chamber model clearly suggests that the free diffusion rate is the main issue with this kind of half-perfusion chamber. The ability of the diffusion chambers to measure the actual absolute values of permeability, and to provide reliable results, should be viewed with caution.