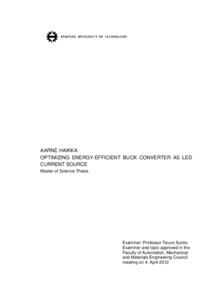 Energy-efficiency demands get tighter and tighter and traditional lighting devices don’t satisfy the demands. LED-lighting efficiency is high, therefore they are a good choice for replacing traditional lighting devices. There are a vast variety of LED-modules on the market, which are setting high demands for an LED current source, especially when high quality dimming is demanded. There is the intention to design a high quality LED current source in this thesis.

Although a buck converter efficiency is high, it produces heat, which has to be minimized. This heat shortens the lifetime of the components and increases the total power loss. However, switched-mode converters have a much better efficiency than linear regulators. Since the operating frequency is high, the converter produces electromagnetic interference to its input, output and to the air. These interferences have to be minimized by a good design.

An LED-modules light output is proportional to the current through it. Dimming can be implemented by reducing the average current flow through it. There are three dimming methods: blocking LED current flow rapidly with a specific duty ratio, reducing the current value linearly, or combining both earlier dimming methods. All dimming methods have pros and cons. Dimming may have the following problems: visible steps between light levels, flickering, stroboscopic effect, audible noise and possible color change.

On the basis of the study, a prototype device was designed in which efficiency and power losses was simulated and measured. The prototype device is hybrid dimmable and its output is optimized for human eye sensitivity. Especially the hybrid dimming results are encouraging, because the dimming is stepless for the human eye. In addition the main circuit is chosen so that the control circuit can be implemented by using low voltage levels, and then a microcontroller can be used.