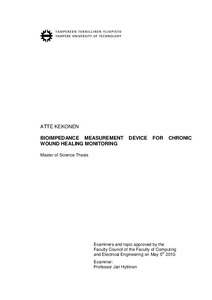 A chronic wound is loosely defined as a wound that fails to heal within a time period of a few months. Elderly bedridden people and people suffering from certain underlying medical conditions, such as vascular diseases and type 2 diabetes, are particularly prone to develop chronic wound. The group of people exposed is increasing in numbers. Treatment of a chronic ulceration is very costly and the monitoring of healing is often based on visual inspection by medical professionals. There exists a need for objective and non-intrusive method for assessment of chronic wound healing.
In this Master of Science Thesis a prototype of a bioimpedance device for monitoring of chronic wound healing was designed, constructed and tested. The device works from an indicator basis and measures the changes in the tissue impedance. The direction of the change correlates with the change in the volume and in the conductivity of the tissue, consequently in the swelling around the inflamed wound. Decrease in extracellular fluid can be detected as increasing low frequency impedance. The device measures impedance at 5kHz and 100kHz frequency by using triangular excitation. The emphasis of the design was on the simplicity of the device to provide a possibility for downscaling in the future. Ultimately the device would be integrated on a patch type platform together with a drug delivery system.
The test measurements with the bioimpedance device were fairly extensive. The measurements were performed with a purely resistive load and a 2R-1C circuit. For 5kHz excitation the results for both load circuits did show only a slight mean error with a fairly small standard deviation. For 100kHz excitation the results did show larger mean error with a small standard deviation. Small standard deviation points to a systematic error. However, the 100kHz results are somewhat controversial since the difference between mean error for the purely resistive load and for the 2R-1C is fairly large. Restricted in vivo measurements were also performed. The in-vivo measurements did show large error compared to the reference measurements. Due to the limited nature of the measurements solid conclusions from these measurements cannot be made. All in all, the test measurements indicate the potential of simplified design. The accuracy of the device can be increased remarkably with certain improvements made to the design.