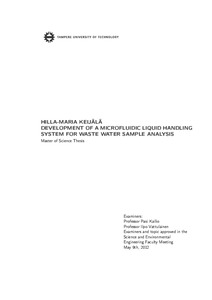 In the point-of-care diagnostics, one of the trends is goal to decrease the amounts of samples and reagents. Also the times which are used to analysis are decreased because of smaller volumes and dimensions. Automation of the measurement protocol is used to decrease the involment of the user when diagnostic equipment is used. Also the costs are decreasing. All this can be carried out with microfluidics which is one of the most important areas of miniaturization technologies. In microfluidics, equipment with small fluid volumes are studied and developed. A microfluidic device has at least one dimension which is measured in micrometres. Sensitive lanthanide ions are typically used as markers when biomolecules are detected. Especially europium is commonly used.

The objective of this research is to study the use of microfluidic polystyrene cartridge in waste water analysis. More specific goals are to study how Eu-labeled polymer particles behave in a microfluidic channel and detection from static and flowing sample. The cartridge reusability when the cartridge is washed between the measurements is also studied.

The research protocol used is based on detection of fluoresence of an Eu-chelate which is attached to the polymer. The Eu-labeled polymers produce high signal levels and provide good sensitivity. Two time-resolved fluorescence measurement equipment are used for detections; Victor^2 multiplate reader and an equipment modified for this study (Hidex).