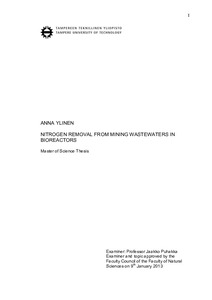 One of the main challenges in the mining industry is the emission of harmful components to the environment. Explosive residues and cyanide-containing leaching solutions release ammonium and nitrate to the environment, which can cause eutrophication, formation of nitrous oxide and acid rain. Biological nitrogen removal in municipal wastewater treatment has lower cost and is more efficient than chemical and physical removal methods. Mining wastewaters are usually acidic and contain toxic heavy metals, which can inhibit the biological processes. Therefore, in the present study, the suitability of biological nitrogen removal for mining wastewaters was studied.
Classical biological nitrogen removal generally consists of two processes. Through nitrification ammonium is oxidized to nitrate, which is then reduced to nitrogen gas through denitrification. In this study, two different wastewater treatment plant sludges were used as source of microbial biomass. Main denitrifiers enriched were bacteria belonging to genera Dechloromonas, Rhodobacter and Sulphurospirillum, whereas the main nitrifier found was Candidatus Nitrospira defluvii.
Limiting pH for denitrification in batch assays was 4.8. With pH 5.0, denitrification was not inhibited. However, continuous fluidized bed reactors (FBRs) were able to neutralize influent of pH 2.5 due to dilution of influent solution with efficient mixing and produced alkalinity. Denitrification was complete at 7°C and 21°C, within the detection limits, when double stoichiometric ethanol/nitrate ratio was provided. When stoichiometric ratio was provided, some nitrate and nitrite remained.
All studied heavy metals decreased denitrification rate in batch assays. Addition of 50 mg/l of copper, cobalt, nickel and arsenic to batch assays at pH 7 resulted in initial dissolved concentrations of 0.8, 55, 63 and 10.5 mg/l. With these concentrations denitrification rate was 11, 15, 18 and 34% slower, respectively, compared to similar experiments without metals. Added nickel concentration of 100 mg/l resulted in 91% slower denitrification.
Nitrification was efficient in both fluidized bed reactors (FBR) and membrane bioreactors (MBR). Ammonium was completely removed at 21°C when pH was maintained at 6-8.4 with sodiumbicarbonate buffer. Ammonium concentration of 100 mg/l was fed with 7 and 20 h hydraulic retention time (HRT) to FBR and MBR, respectively. In MBR, continuous stirring at 120 rpm provided sufficient sludge suspension and use of aeration directly under hollow fiber membrane prevented membrane fouling.

Simultaneous nitrification and denitrification was investigated in the MBR. Reactor was operated with 60 minutes of aeration and 20-60 minutes of non-aeration intervals. Total nitrogen removal was not as efficient as in separate nitrification and denitrification reactors. The highest total nitrogen removal of 67% was achieved when the non-aeration intervals were 60 minutes. However, for future research, longer enrichment time of the bacteria and further optimization of aeration intervals could enhance nitrogen removal.
In this study, no gaseous denitrification products were analyzed. This would be however essential, since previous results from literature reported increase of N2O production in low pH and in copper containing studies. It would be also interesting to study metal toxicity in continuous flow reactors. This way cells would have enough time to uptake toxic metals and the long term toxic effects on bacteria could be analysed. In addition, several different metals should be tested at the same time, since mining wastewaters contain multiple metals and their combined effects can be significantly different from effects of one metal at a time.