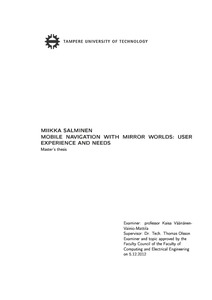 Mixed reality applications have started to become more popular and widespread. One particular area where mixed reality is utilized is navigation applications. This thesis examines one such navigation application, Nokia City Scene. City Scene offers map and panoramic street view with points-of-interest. Main focus of this thesis is navigation; goal is to find out what people expect from navigation applications and Nokia City Scene, and how and on what purposes are different navigation modes used in City Scene. User experience of City Scene is also studied to a lesser extent.
At the beginning of the thesis, theoretical background is provided. Discussed areas are user experience, human navigation and computer aids, and mixed reality and mirror worlds. Nokia City Scene application is then introduced. Rest of the thesis deals with conducted research and its results. There were two studies: an Internet questionnaire for Nokia City Scene users and user study with tourist participants. Tourists traveled to cities supported by City Scene. They were interviewed before and after their trip. Nokia N9 phones with City Scene were loaned for them and they could use them on their trip as they saw fit. Tourists filled diaries while on their trips.
Research's most important finding was that not all users need detailed route information. Some users only needed to check their location and the location of their goal and then they found their own way. Map mode was most used but panoramas were used for confirmation and decision making, especially on last meters of navigation, and for learning details of locations. This means that navigation applications need to support both of these methods. GPS-locating must be fast and accurate and there should be a pointer that shows direction to destination. Since most current research on navigation applications focuses on routes, more research on navigation without routes is needed.