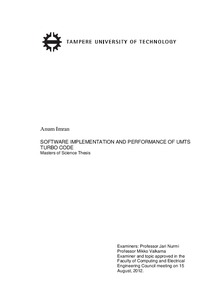 In the recent years, there has been a proliferation of wireless standards in television, radio and mobile communications. As a result, compatibility issues have emerged in wireless networks. The size, cost and competitiveness set limitations on implementing systems compatible with multiple standards. This has motivated the concept of software defined radio which can support different standards by reloading the software and implementing computationally intensive parts on hardware, e.g., iterative codes. In a typical communication system, all the processing is done in the digital domain. The information is represented as a sequence of bits which is modulated on an analog waveform and transmitted over the communication channel. Due to channel induced impairments, the received signal may not be a true replica of the transmitted signal. Thus, some error control is required which is achieved by the use of channel coding schemes that protect the signal from the effects of channel and help to reduce the bit error rate (BER) and improve reliability of information transmission.
Shannon gave the theoretical upper bound on the channel capacity for a given bandwidth, data rate and signal-to-noise ratio in 1940s but practical codes were unable to operate even close to the theoretical bound. Turbo codes were introduced in 1993 where a scheme was described that was able to operate very close to the Shannon limit. Turbo codes are widely used in latest wireless standards e.g. UMTS and LTE. A basic turbo encoder consists of two or more component encoders concatenated in parallel and separated by an interleaver. The turbo decoder uses soft decision to decode the bits and the decoding is done in an iterative fashion to increase reliability of the decision.
In this thesis, the turbo code for the UMTS standard is implemented in MATLAB. Four versions of the Maximum Aposteriori Probability (MAP) algorithm are used in the implementation. The simulation results show that the performance of the turbo code improves by increasing the number of iterations. Also, better performance can be achieved by increasing the frame size or the interleaver size and increasing the signal power. Overall, the designing of turbo codes is a trade-off between energy efficiency, bandwidth efficiency, complexity and error performance.