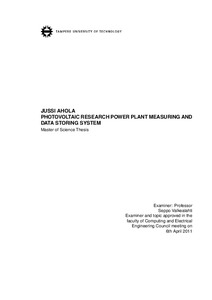 The photovoltaic research power plant of the Department of Electrical Energy Engineering at the Technical University of Tampere consists of 69 solar modules in different configurations, 21 solar (SP Lite 2) and temperature (Pt100) sensors, data measuring and logging cards (cRIO 9074, NI 9144, 2 NI 9205 and 6 NI 9217) and two weather stations with temperature and humidity sensors (HMP155), wind sensor (WS425) and irradiance sensors (CMP21 and CMP22).
This thesis is about connecting these devices together and creating an easy to use and efficient but complex system which processes, collects, saves and provides data from the sensors to researchers. The main goal is to provide researchers with an easy access to the data from the sensors from extended time periods. In the thesis different options and methods to implement the parts of the system have been studied carefully before implementing.
The main parts of the system implementation are the following: The data from the sensors are transmitted via cables and extension cables to the data measuring and logging cards which are connected to the local network. Sensors are either grounded from the cable or from the structure. In addition, a lightning rod was built and installed to protect the wind sensor and personnel. The data processing, collecting and saving implementations have mostly been done in LabVIEW. The data are processed by averaging the data to reduce noise and sending it at a 10 Hz rate to the host computer to be saved into a PostgrSQL database. A file-based system alternative to store the data was also implemented. A graphical user interface (GUI) implementation to the MATLAB was made to help researchers gain specific data from the database more easily. A public Internet site was created in the end for the system, and it offers limited general information to everyone who is interested.
The system was successfully implemented and completed. It is running 24/7 and ready for researchers to take advantage. Everything in the system has been made with the focus that the system will be expanded, and it should be easy to do so in future. It is recommended to study and understand how the system works before expanding it.