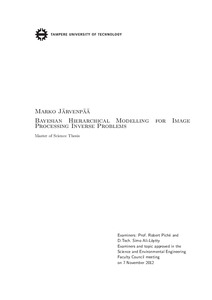 The main motivation of this work is to review and extend some recent ideas in Bayesian inverse problems especially in the context of image processing problems. Often these problems are solved using deterministic optimisation algorithms. A Bayesian hierarchical model for total variation is presented in this thesis. This approach allows all the parameters of an inverse problem, including the “regularisation parameter”, to be estimated simultaneously from the data.
The model is based on the characterisation of the Laplace density prior as a scale mixture of Gaussians. With different densities on the mixture variable, other total variation like regularisations are also obtained. An approximation of the resulting posterior mean is found using a variational Bayes method. In addition, algorithms for computing just the maximum a posteriori estimate, although not a fully Bayesian approach, are presented. The methods are illustrated with examples of image deblurring, image denoising and inpainting, the first of which being the main application of this thesis.
Examples show that the methods generally work well for deblurring problems and the parameters can be succesfully estimated. Maximum a posteriori estimates preserve edges of “blocky” images well. The results given by variational Bayes method are more smooth than corresponding maximum a posteriori estimates which make it more suitable for problems where preserving the edges is not the top priority. As future work faster algorithms could be implemented as well as considering more complex and specialised models based on the ideas of this work.