Biooxidation of iron and sulphur in bioheap leach liquors 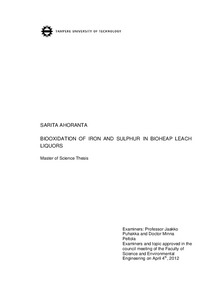 Ferrous iron oxidation and sulphur oxidation are two of the main metabolic functions in acidophilic microorganisms present in bioleaching environments. Metals recovery from sulphide ores is based on oxidation of an insoluble metal sulphide to a water-soluble and leachable metal sulphate. Biological oxidation reactions produce oxidising agents such as ferric ions (Fe3+) and protons, after which the metal is leached chemically. The activity of iron- and sulphur-oxidisers is affected by several microbiological, physicochemical, mineral, and processing parameters. In this thesis, several bioheap leach liquors originating from a mine site (Talvivaara Mining Company Plc, Sotkamo, Finland) were examined. The aim was to study the process liquors that were inhibiting biooxidation processes, and explore the microbiological and physicochemical factors responsible for their impaired growth conditions for the indigenous microorganisms.

The indigenous microorganisms present in leach liquors were enriched by supplementing the cultures with nutrients and either ferrous iron (Fe2+; enrichment of iron-oxidisers) or elemental sulphur (S0; enrichment of sulphur-oxidisers). The enrichment cultures were then used as inoculants in shake flask experiments (100 mL, 150 rpm, pH 1.7, 27 °C) performed to study Fe2+ resistance, aluminium (Al3+) toxicity, and nutrient availability in the leaching environment. Different process liquors (PL1 - PL6) were also compared in terms of their bacterial community composition and growth conditions for the microorganisms.

Incubation of the process liquors (95 % v/v) with iron- or sulphur-oxidising microorganisms (5 % v/v) showed that PL4 limited both oxidation mechanisms more than other liquors. This was the case even though the indigenous bacterial community in PL4 was diverse, containing iron-oxidisers (Leptospirillum ferrodiazotrophum), sulphur-oxidisers (Acidithiobacillus thiooxidans), and bacteria capable of both metabolic functions (Acidithiobacillus ferrooxidans, Acidiferrobacter thiooxydans, Sulfobacillus acidophilus). A dilution series of PL4 in mineral salts medium (MSM) demonstrated that 100 % (v/v) of the liquor had a very low iron oxidation rate (27 mg/L/h), whereas addition of 4 % (v/v) of MSM and 1 % (v/v) of TES (trace elements solution) distinctly increased the oxidation activity (to 156 mg/L/h). It was concluded that PL4 was either lacking essential nutrients, or contained inhibiting components. Compared to other process liquors, it was found that PL4 contained the highest concentrations of several liquor components and in addition, nutrient concentrations in all the process liquors were largely unknown. Thus, further examination was required.

Inoculated PL4 was incubated with nutrients, iron-oxidising microorganisms, and increasing Fe2+ concentrations (5, 8, 12, and 16 g/L) in order to study its Fe2+ tolerance. High Fe2+ content in the culture did not lengthen the oxidation lag phase and increasing iron concentrations even enhanced oxidation rates, demonstrating that the iron-oxidising microorganisms in PL4 were well adapted to high Fe2+ concentrations. This result was expected, as some of the other process liquors with effective oxidation activities had a distinctly higher Fe2+ content than in PL4. The results of a similar aluminium toxicity experiment with different Al3+ concentrations (3, 6, 9, and 12 g/L) revealed that increasing Al3+ concentrations slightly lengthened the lag phase and decreased iron oxidation rates. However, as the iron oxidation rate in a culture containing 12 g/L of Al3+ (almost double the concentration of PL4) remained quite high (119 mg/L/h), it was concluded that aluminium inhibition was not responsible for the impaired growth conditions in PL4.

Incubation of non-inoculated PL4 (50 % v/v) with MSM (49 % v/v) and TES (1 % v/v) resulted in a high iron oxidation rate (175 mg/L/h). However, without MSM or TES the oxidation rate was significantly lower (18 mg/L/h), suggesting that nutrient deficiency was inhibiting the activity of bioleaching microorganisms. Iron oxidation in PL4 supplemented with sodium (Na), potassium (K), phosphorus (P), boron (B), molybdenum (Mo), or selenium (Se), or with a combination of some of these nutrients, was very slow with oxidation rates in the range of 11 - 17 mg/L/h. However, addition of 3900 mg/L of nitrogen (N; a concentration present in 49 % v/v of MSM) resulted in a distinctly higher oxidation activity, with an iron oxidation rate of 154 mg/L/h. Total organic and inorganic N determination performed for PL4 showed that the liquor’s N content was under the detection limit (1 mg/L). It was concluded that the iron oxidation activity in PL4 was N limited. As previously shown in the dilution series, PL4 supplemented with 4 % (v/v) of MSM had a high iron oxidation activity, indicating that PL4 required 319 mg/L or less of N.

This thesis work demonstrated that nitrogen supplementation to PL4 would increase iron oxidation rates and leaching efficiencies in bioheaps. In future studies, the N concentration required by the indigenous microorganisms in PL4 should be examined. Nutrient deficiency rather than high ion concentration was demonstrated to be the limiting factor for microbial activity. The limiting concentrations of some of the most high-content anions and cations in the prosess liquors, such as that of sulphate (SO42-), remain to be determined.