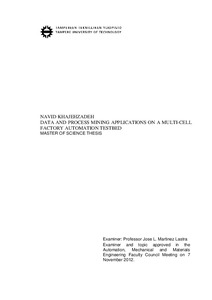 This paper presents applications of both data mining and process mining in a factory automation testbed. It mainly concentrates on the Manufacturing Execution System (MES) level of production hierarchy.
Unexpected failures might lead to vast losses on investment or irrecoverable damages. Predictive maintenance techniques, active/passive, have shown high potential of preventing such detriments. Condition monitoring of target pieces of equipment beside defined thresholds forms basis of the prediction. However, monitored parameters must be independent of environment changes, e.g. vibration of transportation equipments such as conveyor systems is variable to workload. This work aims to propose and demonstrate an approach to identify incipient faults of the transportation systems in discrete manufacturing settings. The method correlates energy consumption of the described devices with the workloads. At runtime, machine learning is used to classify the input energy data into two pattern descriptions. Consecutive mismatches between the output of the classifier and the workloads observed in real time indicate possibility of incipient failure at device level.
Currently, as a result of high interaction between information systems and operational processes, and due to increase in the number of embedded heterogeneous resources, information systems generate unstructured and massive amount of events. Organizations have shown difficulties to deal with such an unstructured and huge amount of data. Process mining as a new research area has shown strong capabilities to overcome such problems. It applies both process modelling and data mining techniques to extract knowledge from data by discovering models from the event logs. Although process mining is recognised mostly as a business-oriented technique and recognised as a complementary of Business Process Management (BPM) systems, in this paper, capabilities of process mining are exploited on a factory automation testbed. Multiple perspectives of process mining is employed on the event logs produced by deploying Service Oriented Architecture through Web Services in a real multi-robot factory automation industrial testbed, originally used for assembly of mobile phones.