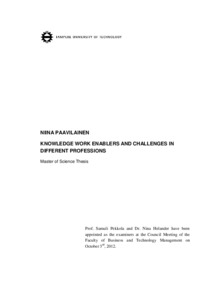 The purpose of this study was to examine the enablers and the challenges of the knowledge work in different professions. The chosen professions were teacher, physician, lawyer, pastor and conductor. The objective of the thesis was approached by studying the knowledge work enablers and challenges first theoretically and then empirically. Finally, the empirical findings were analysed by comparing the professions with one another and discussing the findings together with the theoretical findings.

The study was a qualitative research which followed the hermeneutic idea of science. Therefore, the study aimed to gain an understanding of the research phenomenon and examine it from different angles. In addition, the study was slightly influenced by the conceptual approach. The research was carried out as a multiple case study research so that the different professions presented the separate cases. The data for this thesis was gathered by using the narrative interview method. From each profession there were interviewed four professionals.