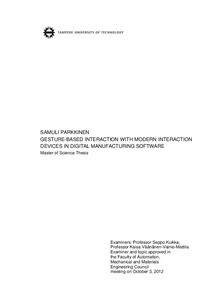 Traditionally, equipment for human-computer interaction (HCI) has been a keyboard and a mouse, but in the last two decades, the advances in technology have brought com-pletely new methods for the HCI available. Among others, digital manufacturing soft-ware 3D world has been controlled with the keyboard and mouse combination. Modern interaction devices enable more natural HCI in the form of gesture-based interaction. Touch screens are already a familiar method for interacting with computer environments, but HCI methods that utilize vision-based technologies are still quite unknown for a lot of people. The possibility of using these new methods when interacting with 3D world has never been studied before.
The main research question of this MSc. thesis was how the modern interaction de-vices, namely touch screen, Microsoft Kinect and 3DConnexion SpacePilot PRO, can be used in interacting with 3D world. The other research question was how the gesture-based control should be utilized with these devices. As a part of this thesis work, inter-faces between 3D world and each of the devices were built.
This thesis is divided into two main parts. The first background section deals with the interaction devices, 3D world, and also gives the necessary information that is need-ed in fully utilizing the possibilities of these interaction devices. The second part of the thesis is about building the interfaces for each the above-mentioned devices.
The study indicates that the gesture-based control with these interaction devices cannot replace the functionality of a keyboard and a mouse, but each of the devices can be used for certain use cases in particular use scenarios. Two dimensional gesture-based control on touch screen suits well for using camera controls as well as doing the basic manipulation tasks. Three dimensional gesture-based control when using Kinect is ap-plicable when it is used in specially developed first person mode. Kinect interface re-quires a calm background and quite a large space around the user to be able to be used correctly. Suitable use scenario for this interface is doing a presentation to audience in front of an audience in a conference room. The interface for SpacePilot PRO suits well either for controlling the camera or manipulating object positions and rotations in 3D world.