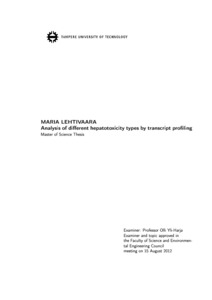 The aim of this project was to study whether it is possible to identify histopathological changes in liver based on gene expression profiles, regardless of the toxic causing the change. Another goal of the project was to study whether gene expression data can be used as a reference when predicting possible histopathologies in future samples treated with possible drug candidates. For this purpose, data from in vivo microarray gene expression studies of rat liver from Japanese Toxicogenomics Project database (TG-GATEs, published in February 25, 2011) was used. Possibility of using smaller doses and shorter experiment times in order to save resources was studied by comparing different exposure times and dose levels.

Separation between different histopathological groups was studied using Principal Component Analysis and K-nearest neighbor cross-validation. The differentially expressed genes and enriched gene ontologies from each group were listed, and the gene lists were studied further and compared to observe possible causes and mechanisms of toxicity. Time and dose responses were analyzed similarly. Some comparisons using well-known and possible candidate drug molecules were made in order to test the predictive use of the data.

In the theory section microarray technology and data analysis are explained, and the field of toxicogenomics and TG-GATEs -database are presented based on articles from scientific journals and books. Analyses are performed using R-language, Bioconductor-packages and Ingenuity IPA -software. Customized CDF-fi les were used in analysis to provide most current and accurate results.

It was noticed that while other histopathologies are clearly separated from the controls, others are more spread out. Spreading is likely to be caused by number of different mechanisms causing the toxicity in some groups, but also due to different analysis factors (severities of the findings, exposure times and dose levels). It seems that the data and gene expression pro les can be used as references when estimating possible toxicity of a drug molecule and the mechanisms of it. Some dose and time response was noticed. Due to the complex nature of gene expression, samples treated with different doses and exposure times are needed to see the direction of the development: single values from a single data point can be misleading.