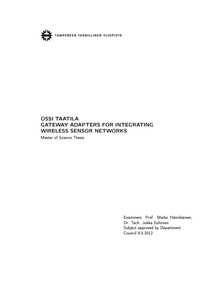 This thesis reports the design and prototype implementation of an adaptation layer for connecting several wireless sensor network technologies to the same gateway. An adaptation layer consists of technology specific adapters, which convert the technology specific measurement messages to one unified message format understood by the gateway. This makes it possible to use the measurement data similarly regardless of the sensor network it is from.

This thesis presents adapter implementations for ZigBee, Z-Wave, and Bluetooth networks. The adapters are tested as a part of a larger ensemble, where the measurement data is used in cloud services. In addition this thesis introduces requirements for designing and implementing new sensor network adapters.

On the downside, the adaptation layer increases delays between a wireless sensor network and a gateway. It also adds a layer of complication to the architecture, creating one additional unreliability factor.