Comparison of different versions of TCP in 802.11 WLANs 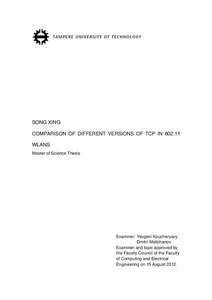 Nowadays, Transmission Control Protocol (TCP) is widely used in 802.11 Wireless Local Area Networks (WLANs) because it can provide reliable communication connection between two hosts. This thesis discusses whether a base station in some 802.11 WLAN may be a bottleneck for uplink TCP flows because of delay of acknowledgements (ACKs) in downlink flows when this base station is the only one in the network. The conclusion can be obtained by comparing throughputs of different versions of TCP in 802.11 WLAN. The method is to examine whether there is big difference between the throughputs of different versions of TCP with more or less ACKs. So, the throughputs of normal TCP and TCP with delayed ACKs are compared.
The thesis is composed of six parts. The first part is introduction. The second part is introduction to theoretical background. Some essential background knowledge about TCP and 802.11 protocols are introduced. The third part is problem statement. The question concerned in the thesis is introduced. The fourth part is description of simulations and throughput calculation. The simulations are designed by using the software called Network Simulator 2 (NS2). The throughputs are calculated by using an AWK file. Then, the next part is to show the results, including result figures and discussion. The last part is conclusion.
In the scenarios of this paper, the conclusion indicates that there is no big difference between the throughputs of different versions of TCP with more or less ACKs even though the difference exists statistically. With the number of sources increase, the throughputs of compared versions of TCP decrease and the difference of their throughputs is not as big as some users have expected. So, it is clear that the only base station in some 802.11 WLANs does not become a bottleneck for the uplink TCP flows because of delayed ACKs in the downlink flows. The results of this study indicate that it is not necessary for users to use TCP with less ACKs. In most of cases in daily life, it is enough to use normal version of TCP in 802.11 WLANs which only have one base station.