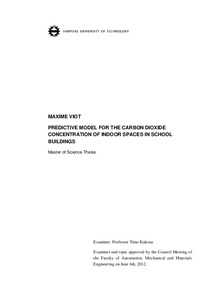 The objective of this thesis was to establish a trustable predictive calculation model for the carbon dioxide concentration of the air in indoor spaces and especially in school buildings. The model had to take into account not only the rooms, but also the neighboring spaces such as other rooms or corridors. These interactions are included to the model by analyzing of the airflow between different indoor spaces. The purpose of the model was to use better all the indoor spaces of the buildings to guarantee healthy air conditions but also to reduce the total demand for mechanical ventilation to save energy.

At first, a wide review of the literature has been made on the indoor air conditions, the control of ventilation inside of buildings and the existing calculation models. This provided a global knowledge on the subject, especially the official standard requirements needed before starting to analyze the problem.

Secondly, the mathematical model to predict the concentration of carbon dioxide inside the rooms of the school buildings was created. A particular focus was made on studying the airflows through an opening between two rooms and through the opened windows. Also, human emissions of carbon dioxide have been carefully considered due to their important influence on the indoor air conditions.

Finally, the measurements have been conducted for different situations in order to make comparisons with the model’s results. They showed that using the other ventilation possibilities given by the different rooms and the windows can reduce the needs for mechanical ventilation. It has also demonstrated the ability of the model to give realistic results which could be further used for a ventilation control strategy.