Oxygen - To Lung Surfactant and Beyond 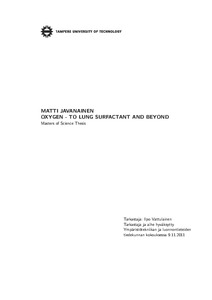 Lung surfactant is a thin lining covering the air-water interface inside the alveoli. Its main function is to reduce the surface tension at this interface and thus prevent the alveoli from collapsing at the end of the breathing cycle. In addition to its importance in maintaining proper lung function, it is suggested that this monolayer aects the permeation of small non-electrolytes such as molecular oxygen from inhaled air towards circulation. However, the results on this topic are extremely diverse. Earlier computational studies have been inadequate in terms of monolayer composition and state, simulation conditions and force eld parametrisations and the amount of employed computational resources. They have also often considered either energetic or kinetic factors on permeability alone. On the other hand, lack of resolution has been the main issue with experimental studies on oxygen permeability.

To overcome these limitations, the permeation properties of protein-free surfactant membrane systems were studied through long atomistic molecular dynamics simulations with high spatial resolution. Monolayers at dierent compression states were employed with the lipid composition and simulation conditions of the systems mimicking that of the real surfactant. In addition to the permeation properties of the monolayer, information about oxygen pathways below the interface were also discussed with the data obtained from bilayer simulations with the same composition.

A new model for molecular oxygen was sought in this study and its performance was verified with multiple benchmarks. A special free energy technique, the z constraint method was employed together with the inhomogeneous solubility{diusion model to study the permeabilities of the membrane systems as it provides one with detailed information about both energetic and kinetic factors on permeation. The key values of the spatially resolved free energy and diusion coe cient pro les along the membrane normal agree with those of earlier studies yet the detailed pro les also provide new and interesting information. The calculated permeabilities of the monolayer systems are successfully linked to the other physical quantities characterizing the monolayers. The possible suggested structures lying below the surfactant monolayer are compared based on their eect on oxygen transport. Finally, thorough comparison is performed between our calculations and earlier studies.