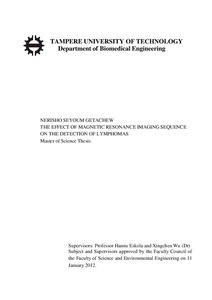 Because of its superior sensitivity toward soft tissues, including neoplasm, MRI imaging is rapidly becoming one of preferred imaging modality. Improving the sensitivity of MRI for the detection of aggressive lymphomas, DLBCL, is vital in the diagnostic workup, staging and treatment planning. It is also useful for the better understanding of treatment outcomes in the disease follow-up process.
In this study, the sensitivity of the four MRI sequences, before and after treatment, in delineating the lesion and evaluating the response to treatment is studied.
Eighteen patients with histologically proven DLBCL underwent a 3T MR scanning before treatment, and fifteen of them were re-scanned one week after chemotherapy. The four MRI sequences studied are pre and post contrast enhanced T1-weighted imaging, T2-weighted imaging with and without fat suppression. Before treatment all but one patient had not had T2-weighted fat suppression MRI protocol. The four MRI sequence were quantitatively evaluated based on the normalized mean signal intensity calculated from the measured signal intensities of the lesion and normal tissues.
The conspicuity level of the tumor was superior on T2-weighted with fat suppression images both before and after treatment. And these difference were significant (p<0.05). The post contrast enhanced images ranked the second. One week after treatment, there were a significant decrease in the signal contrast ratio of the T2-weighted with fat suppression images whereas there were no significant decrease in the signal contrast ratio of the post contrast enhanced T1-weighted images.
T2-weighted with fat suppression sequence is the best for detecting lymphoma lesions and evaluating treatment efficacy in patients with DLBCL.