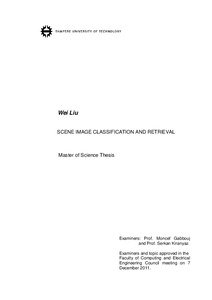 Scene image classification and retrieval not only have a great impact on scene image management, but also they can offer immeasurable assistance to other computer vision problems, such as image completion, human activity analysis, object recognition etc. Intuitively scene identification is correlated to recognition of objects or image regions, which prompts the notion to apply local features to scene categorization applications. Even though the adoption of local features in these tasks has yielded promising results, a global perception on scene images is also well-conditioned in cognitive science studies. Since the global description of a scene imposes less computational burden, it is favoured by some scholars despite its less discriminative capacity. Recent studies on global scene descriptors have even yielded classification performance that rivals results obtained by local approaches.
The primary objective of this work is to tackle two of the limitations of existing global scene features: representation ineffectiveness and computational complexity. The thesis proposes two global scene features that seek to represent finer scene structures and reduce the dimensionality of feature vectors. Experimental results show that the proposed scene features exceed the performance of existing methods.
The thesis is roughly divided into two parts. The first three chapters give an overview on the topic of scene image classification and retrieval methods, with a special attention to the most effective global scene features. In chapter 4, a novel scene descriptor, called ARP-GIST, is proposed and evaluated against the existing methods to show its ability to detect finer scene structures. In chapter 5, a low-dimensional scene feature, GIST-LBP, is proposed. In conjunction with a block ranking approach, the GIST-LBP feature is tested on a standard scene dataset to demonstrate its state-of-the-art performance.