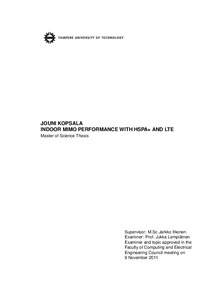 Tietotekniikan koulutusohjelma
This publication is copyrighted. You may download, display and print it for Your own personal use. Commercial use is prohibited.

The focus of this thesis is to perform and study indoor measurements with both HSPA+ and LTE MIMO setups. The reason behind this study is to validate the benefits of MIMO implementation in indoor cells. MIMO scheme is compared against single antenna configurations and other test cases, such as different antenna diversity setups for spatial multiplexing and studying the effect of attenuation imbalance in MIMO antenna lines. In terms of performance, air interface throughput is used to compare different setups. Measurements were performed in a office building, using single cell with minimal interfernce. Throughput results were gathered in both mobile routes and in static locations, using laptop and spatial multiplexing MIMO capable commercial USB modems.

LTE with OFDMA is more stable in terms of throughput variance than HSPA+ using WCDMA. Static measurement results show that current state of dual stream MIMO reception is very sensitive to receiver antenna orientation with both HSPA+ and LTE. Small change in receiver orientation can have a large effect to obtained throughput rate.