Comparison between Droptail and AQM-RED in Wireless Network 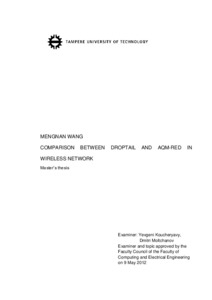 Queue management is a way to control congestion. There are two algorithms used with TCP protocol that are commonly utilized in nowadays network: Droptail and RED. Droptail is easy to implement but has the problems of lockout and synchronization; RED is complicated but it avoids congestion in advance and reduces the average queue size. Most researches concentrate on the performance of the two algorithms in wired network. But in this thesis, we discuss the performance, i.e. throughput, in wireless network.
The results indicate that RED has no superiority compared to Droptail with different amount of nodes and packet loss probability in wireless network. In the future, researchers can optimize RED or develop other algorithms fit for wireless network.
The thesis first introduces the background of congestion control, the basic knowledge of Droptail and RED, and the related techniques that we used in the simulation. Then the two simulation models based on NS2 is presented. Details of implementations are given as well. The results of comparison are in the last part of the thesis.