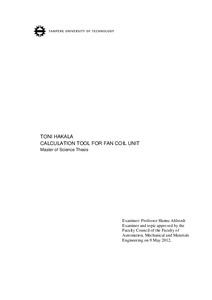 The aim of this Master of Science Thesis was to develop an MS Excel-based calculation tool for cooling and heating capacities in Halton Group´s new product, the Fan Coil Unit. The Fan Coil Unit is commonly used in passenger cabins of cruisers to cool or heat the cabin air. The number of customer orders of the Fan Coil Unit has been increasing, therefore, Halton Group’s subdivision Marine had a need to get this tool to save time, which had earlier gone to calculations for each unit order separately.

Cooling demand consists of two kinds of heat loads: latent and sensible heat load. The part of the heat load which is caused by evaporation, is called the latent heat load. The latent heat load comes from for example the cabin, when the passenger's skin is sweating and from the shower facilities when water vapor is released into the cabin air. Sensible heat is heat exchanged by a body or thermodynamic system that has as its sole effect a change of temperature.

This Thesis is divided into two parts. The first part will offer a basic theoretical background for the features that will be dealt with in the second part. The basic principles of Fan Coil Unit, heat transfer properties between air and water and other mathematical functions that have been used in this work are presented in the first part. The structure of the calculation tool and operations manual, are presented in the second part.

As a result of this work, the calculation tool was developed and found to be appropriate for designing as well as improving the Fan Coil Unit.