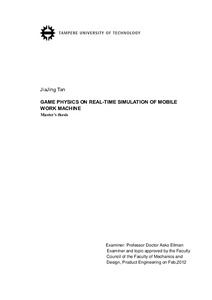 Master's Degree Programme in Machine Automation
This publication is copyrighted. You may download, display and print it for Your own personal use. Commercial use is prohibited.

Game physics has been around since the first game were created around thirty years ago, it was first developed from sparks fireworks, ballistics of bullets to a physical simulation of human skeleton in most recent years. With its rapid development, game physics expanded its usage from virtual game into various tasks in numerous areas. The thesis tests usage and reliability of the game physics into mobile machine simulation. It compares machine simulation in Matlab, as traditional programming approach, with the result in Blender game engine, a 3D application integrated with game physics. The process of developing dynamic behaviors in game physics is separated into several main steps: importing of ready-made model, setting up of physical properties, creation of interactive logic controls and finally position calculation of crane via Python scripting. Different results regarding game physics are collected and compared alongside with two methodologies and thus final evaluation of Game physics and its implementation in mobile machine area are given in the end.
The quality of simulation as an example provides a high degree of realism and interaction between users and computers than traditional approaches. During the process, reader could understand the totally different modeling and simulation styles existing in two methodologies, Matlab and Blender game engine. The thesis offers readers one idea about game physics and how physics could be integrated into and thus being able to distinguish the advantage and disadvantage of game physics and get an idea on the future state of virtual reality technology in general.