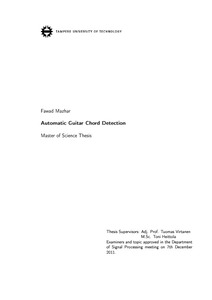 This thesis presents a novel approach for detecting the correctness of musical chords played by guitar. The approach is based on pattern matching technique applied to the database of chords and their typical mistakes. Mistakes are the versions of a chord where typical playing errors are made. Transient of a chord is skipped and its spectrum is whitened. A certain region of whitened spectra is chosen as a feature vector. Cosine distance is computed between the extracted features and the data present in a reference chord database. Finally, the system detects the correctness of a played chord based on k-Nearest Neighbor (k-NN) classifier.

The developed system uses two types of spectral whitening techniques: one is based on Linear Predictive Coding (LPC) and the other is based on Phase Transform-beta (PHAT-beta). The average accuracy shown by LPC based system is 72% while that of PHAT-beta is 82.5%. The system was also evaluated under different noise conditions.