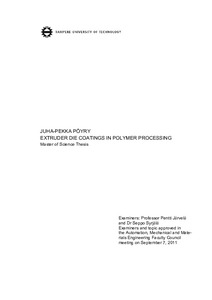 Extruder die coatings were studied in the extrusion of modified polyethylene (PE-mod). When PE-mod is extruded at elevated temperatures, it will change into a high-viscosity polymer melt causing high pressure inside the extruder die. The temperature is elevated to activate a cross-linking reaction to endow the end product with favoured properties. However, the increased pressure renders difficulties in the extrusion process reducing production rate and increasing power consumption. For the efficient extrusion of PE-mod, a lubricant, non-sticking, and wear resistant coating is needed.
Pressure drop across the extruder die can be decreased by increasing wall slipping. Certain molten polymers exhibit wall slip behaviour along the extruder die surface under sufficient shear stress. Low surface energy coatings, namely fluoropolymers, can substantially enhance slipping but their propensity to wear causes problems. By studying factors inducing wall slip, different coatings and surface treatments were chosen for comparative testing.
Tests were done using a cone extruder with a custom fabricated annular extruder die. Pressure drop and drag force exerted on the torpedo of the die by flowing polymer melt were measured. Altogether six coatings were tested and a two-day continuous ex-trusion experiment was conducted for a fluoropolymer coating to gain better under-standing of the wear characteristics. In addition to pressure and force measurements, post-extrusion analyses for the fluoropolymer coating were made using scanning elec-tron microscopy (SEM), optical profiling, infrared spectroscopy (IR) and differential scanning calorimetry (DSC).
Fluoropolymer coatings were shown to exhibit the strongest wall slipping behaviour by gaining the lowest pressure drops and drag forces over the extruder die surface at the same throughput rate. Wear characterization revealed intriguing result: the slipping be-haviour of fluoropolymer coating is impaired by small fractions of PE-mod sticking on the surface of the coating. Furthermore, several improvements were suggested in order to perfect the measurement facilities. /Kir12