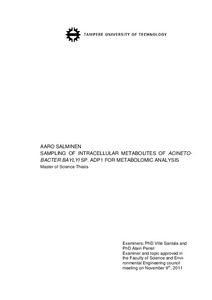 Acinetobacter baylyi sp. ADP1 is a nutritionally versatile bacterial strain capable of natural transformation and homologous recombination. It has a unique metabolism, as it is capable of using a vast collection of compounds as a sole carbon source. It is non-pathogenic and easy to work with in the laboratory. The great potential of ADP1 lies in its usage as a laboratory model organism, as well as in bioremediation. The strain is well characterized, as full genomic sequence and metabolic model exist already. However, no metabolomic analyses have been performed so far.
Metabolomics has recently developed into an important field in biotechnology with many potential new applications. As a new area of interest, it is only in early stages of development, but nevertheless many powerful techniques already exist. However, lots remain to be discovered. As every bacterial species can be very different, the methods of metabolomics need to be designed for every study independently. This is why it is of great importance to optimize the metabolite extraction protocol specifically for each project.
The purpose of this work was to optimize a new extraction protocol of intracellular metabolites from ADP1, for the purpose of metabolomic analysis with high resolution mass spectrometry. An initial protocol, set up and Genoscope, and based on literature and some previous testing, was used as a basis for the optimization. From this protocol, the culture conditions, quenching procedure, sample storage and data analysis were reassessed. In the end, the final protocol was tested with the cells cultivated in two different carbon sources. The final protocol improved the quality of acquired data significantly, providing a better efficiency in quenching of the metabolism and metabolite extraction, leading to more detected metabolites in the final data. In addition, the extraction process was made more organized and faster to perform. /Kir11