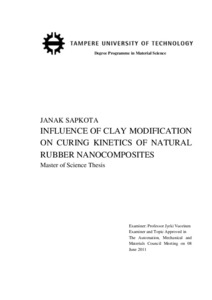 The concept of nano-reinforcement with layered silicates, which was introduced by researchers at the Toyota Central Research Laboratories (Japan), has become very popular recently. The ongoing R&D interest in this type of reinforcement is mostly due to the unexpected property improvements when the silicates are dispersed on nanometer scale. The dispersion of the fillers and curatives is very important, as it is one of the dominant factors in determining the overall properties of the material. Additionally, the overall behaviour of the nanocomposites is governed by the curing mechanism, and this can be elucidated by exploring the curing kinetics.
Two different types of modified clay based on Montmorrillonite, Nanofill® 5 modified with di-methyl-dihydrogenated tallow alkyl quaternary ammonium and Nanoclay® 682616 modified with octadecylamine, were added to natural rubber and cured by a conventional vulcanization system. The filler loading was varied from 0-15 phr to investigate the influence on processing and properties. For the kinetic curing studies, a compound with 10 phr clay loading was used.
X-ray diffraction (XRD) studies indicated, that the basal spacing of the clay minerals were increased for the NR-MMT nanocomposites. The dynamic mechanical analysis using a strain sweep mode showed that the Payne effect decreases due to an improved dispersion of carbon black induced by the presence of nanoclay. A rheometric study showed interesting results: a faster curing rate for nanoclay and a lower torque due to a plasticisation effect of the modifier which was used for clay modification. The changes in hardness and tensile strength were smaller than expected for the addition of a nanofiller.
Rheometric studies disclosed some significant details about the cure kinetics: the activation energy of the vulcanization process is reduced by the presence of modified nanoclays, indicating an easier crosslinking of clay containing compounds. In addition, it was revealed that the quaternary ammonium compounds contained as modifier in the clay, shows a plasticization effect.
Due to the positive results obtained in this and similar studies, further research on this field should be encouraged. Additional research on the curing kinetics of the nanoclay filled rubber compounds is crucial for the development of the nanoclay technology and its full potential for applications in rubber nanocomposites. /Kir11