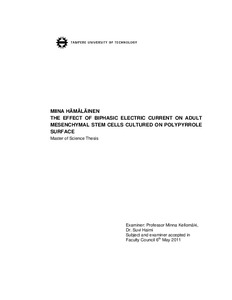 Materiaalitekniikan koulutusohjelma
This publication is copyrighted. You may download, display and print it for Your own personal use. Commercial use is prohibited.

Electrical stimulation (ES) is a novel approach to osteogenic differentiation of mesenchymal stem cells (MSCs). Even though ES has been acknowledged as a treatment method for bone fractures already for two decades, it has gained more interest in the field of bone tissue engineering only for a few years. Therefore, also research of electroconductive scaffold materials is increasing in order to find an optimal osteogenic material to combine with the effect of ES. Polypyrrole (PPy) is a conductive biomaterial which is biocompatible with various cell lines and therefore a considerable option for mediating the electric current (EC) for MSCs. The combined effect of ES and PPy on MCSs could provide an alternative method for drugs and cytokines used in bone tissue engineering.
PPy was synthesized electrochemically on top of a gold-coated polyethylene terephtalate (PET) film. Adipose-derived MSCs, adipose stem cells (ASCs), were exposed to ES for 4 hours a day during 14 days at amplitude of ±0.2 V. There were 3 different stimulation groups to compare: a group with no stimulation (control) and groups with the frequency of 1 Hz and 100 Hz. In addition, two different PPy dopants were compared: hyaluronic acid (HA) and chondroitin sulphate (CS). Groups were also divided into osteogenic differentiation medium (OM) and basal medium (BM). In order to determine the viability, proliferation and differentiation of the cells, Live/Dead staining, DNA detection and alkaline phosphatase assays were used, respectively, at days 7 and 14 from the beginning of the stimulation.
PPy showed good biocompatibility with CS doped PPy (CS-PPy) in the viability examination in both media and in all of the stimulation groups, whereas ASCs on HA doped PPy (HA-PPy) formed clusters. Stimulation groups did not show any differences; however, a trend could be seen in the proliferation of CS-PPy in osteogenic medium (OM). CS-PPy showed significantly higher effect on proliferation, whereas HA-PPy supported on differentiation.
CS-PPy coatings seem to offer a suitable conductive surface for ASCs in osteogenic applications. /Kir11