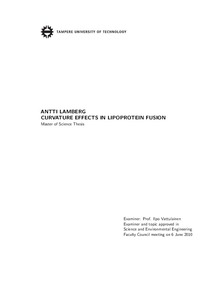 Teknis-luonnontieteellinen koulutusohjelma
This publication is copyrighted. You may download, display and print it for Your own personal use. Commercial use is prohibited.

High and low density lipoproteins (HDL and LDL, respectively) are of tantamount interest to studies on human health, as these cholesterol transporters are highly involved in cardiovascular diseases, the leading cause of death in the industrialized world. While HDL acts to prevent cholesterol from building up in excess, the larger LDL particles may get stuck inside artery walls, fuse with other LDL particles and finally burst out from the wall, causing a stroke.

The fusion of simpler systems has been studied for decades, but the details of lipoprotein fusion and the factors promoting fusion remain elusive. In this Thesis we studied the effect of varying surfactant composition to lipid droplet fusion, which form the core of lipoproteins.

Pressure profiles have been suggested to give a quantitative picture of how properties of interfaces, such as interfacial tension arise. These profiles have been studied by physicists for a long time, but it was only relatively recently that a biological relevance was postulated and a new interest surged. While experimental techniques are still not refined enough to probe these biological systems because of their extremely small sizes, in the last few years it has become computationally feasible to carry out research in relevant length and time scales.

Using pressure profile calculations, we vary the surfactant compositions of HDL/LDL based lipid droplets so as to keep some quantities constant while varying others. From simple systems, it is known that interfacial tension is the most important factor in fusion and phase separation. Using large-scale computers to run a steered molecular dynamics simulation method developed by us, we show that the fusion rates of lipid droplets are greatly affected by their lipid composition and that interfacial tension alone cannot explain this tendency. We explore alternative explanations and their feasibility. /Kir11