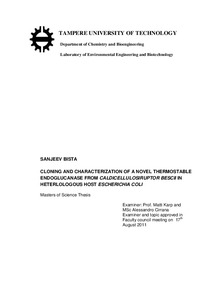 Caldicellulosiruptor bescii DSM 6725 is a gram positive and asporogenic bacterium that utilizes various polysaccharides and grows efficiently on untreated plant biomass at an optimum temperature of ≈ 80 °C. In this study, cellulase genes coding endo-l, 4-β-D-glucanase and exo-1, 4-β-D-glucanase (cellobiohydrolase) were cloned from the genomic DNA of saccharolytic thermophilic anaerobic bacteria C.bescii and expressed in Escherichia coli BL21. The endoglucanase gene contains an ORF of 2,268 bp encoding a protein of 755 amino acid residues, with a calculated molecular weight of 82.154 kDA. It carries a typical prokaryotic signal peptide of 30 amino acid residues. The amino acid sequence alignment of this typical endoglucanase showed 71% homology to cel5A (endoglucanase) from Thermoanaerobacter tengcongensis MB4 and 65% homology to endoglucanase from Caldicellulosiruptor saccharolyticus. Residues Glu187 and Glu289 were identified as key catalytic amino acids by sequence alignment. The apparent molecular mass of the endoglucanase protein when expressed in E.coli is found approximately 75 kDa, and the highest CMCase activity was observed in intracellular space with comparison to extracellular space.
The optimum pH and temperature for the enzyme activity of the endoglucanase were 5 and 70 °C, respectively. However, enzyme activity was observed over a broad range of pH values and temperatures. The expressed and purified endoglucanase retained over 90% of its original activity after incubation at 70 °C for 24 hours. This suggests that the endoglucanase from C.bescii is thermostable and active at different pH. /Kir11