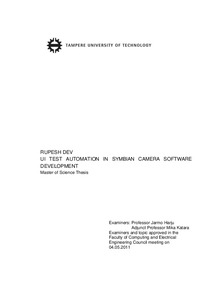 Software testing is one of the most cost-intensive tasks in the modern software production process. Software testing needs to be effective not only at finding the defects, but also in performing the tests as quickly and cheaply as possible. Automation in software testing has been used widely to achieve faster test results in limited time and effort.
This thesis tries to demonstrate model based testing (MBT) approach as one of the most promising automation methods developed in recent times. Model based testing is a relatively new software test automation methodology that automates not only the test execution, but also the test generation. The basic idea is to create formal test models which possess the logic of the system to be tested and generate tests based on the models.
This thesis also presents an implementation of a model based approach in automating the software tests. Scope of the thesis is to carry out only UI related test automation. The target system to conduct the test runs is Symbian OS. In the case studies section, the entire procedure of automating the test cases has been explained. Only camera and messaging related test cases have been automated so far. The end devices selected for executing the test runs are Nokia smartphones, namely N8 and E7.
This thesis also analyzes potential problems in deploying model based approach in wider scale and at the same time also proposes an intermediate solution for deploying it in industries within small teams. At the end, the thesis concludes by recommending ways to implement MBT approach in other mobile software platform like Windows Phone. /Kir11