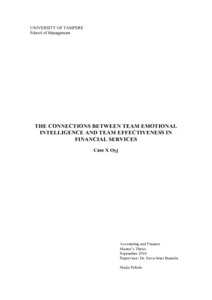 The increasing need for growing effectiveness in companies dealing with challenges of globalized markets has heightened the need for research on what makes work groups or teams more effective. Since the 1990's the concept of emotional intelligence has intrigued researchers in the field of both psychology and business economics. Recently, there has been growing interest in studying the connections between emotional intelligence and effectiveness or performance. Emotional intelligence has been stated to aid in adapting to changing environments, effective communication and applying a variety of interpersonal skills that are crucial in teamwork. Moreover, distinctive features of an effective team have been examined covering characteristic of the team and external factors.

In the literature review the concept of emotional intelligence was presented extensively and the most prevalent characteristics of an effective team were reviewed. The existing studies covering the connections between these two were summarized. The theoretical framework includes three parts; team emotional intelligence (social and personal competencies), the known connections and the unknown connections to team effectiveness.