Reframing pension policy: A comparative perspective on communicative discourse in Austria and Germany 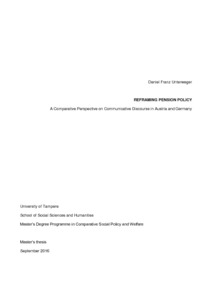 Bismarckian pension systems are usually depicted as path-dependent. Nonetheless, many formerly traditional Bismarckian systems shaped by public old-age provision have recently been reformed towards capital-funding and privatization, therefore paving the way for structural change usually not accounted for by path-dependency literature. However, the extent of those reforms varies drastically, even between relatively similar countries like Austria and Germany. Those very similar countries, previously organising their pension systems through a social insurance principle (Bismarckian pension systems), having the same welfare regime (conservative), being subject to demographic and budgetary pressure with roughly the same economic performance, have taken drastically different paths in the beginning of 21th century. This master thesis now aims to address this research puzzle through empirically assessing the power of ideas and discourse in explaining policy change. The main argument of this research is that policy actors and entrepreneurs in Germany were able to implement wide ranging reforms because they successfully handled the policy and political stream, framing communicative discourse until privatized, funded pension policies were seen as a cognitively and normatively acceptable solution, while their Austrian counterparts failed to do so. Methodologically, this master thesis tries to present evidence through a discourse analysis of 357 newspaper articles published during the specific reform periods in which privatization was considered as a policy alternative in Austria as well as Germany. Ultimately, evidence suggests that ideas and discourse can indeed make a difference. Not everything happens behind closed doors, even in corporatist, multi- actor systems. Policy entrepreneurs indeed act as discoursive actors and engage in communicative discourse to promote their favoured policy ideas. Pension reform in Germany involved a long and decisive framing process. In Austria, such an open attempt to frame communicative discourse towards privatization and capital funding was not visible. Ideas incompatible with the hegemonic discourse have had a hard standing because they were cognitively and normatively not accepted and provoked decisive action by opposing discoursive actors, suggesting that the framing process has to begin early enough and has to be coherent and consistent. Respectively, strong opposing discoursive actors can also defend the hegemonic discourse through quick and decisive action.