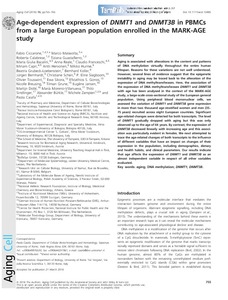 Aging is associated with alterations in the content and patterns of DNA methylation virtually throughout the entire human lifespan. Reasons for these variations are not well understood. However, several lines of evidence suggest that the epigenetic instability in aging may be traced back to the alteration of the expression of DNA methyltransferases. Here, the association of the expression of DNA methyltransferases DNMT1 and DNMT3B with age has been analysed in the context of the MARK-AGE study, a large-scale cross-sectional study of the European general population. Using peripheral blood mononuclear cells, we assessed the variation of DNMT1 and DNMT3B gene expression in more than two thousand age-stratified women and men (35-75 years) recruited across eight European countries. Significant age-related changes were detected for both transcripts. The level of DNMT1 gradually dropped with aging but this was only observed up to the age of 64 years. By contrast, the expression of DNMT3B decreased linearly with increasing age and this association was particularly evident in females. We next attempted to trace the age-related changes of both transcripts to the influence of different variables that have an impact on changes of their expression in the population, including demographics, dietary and health habits, and clinical parameters. Our results indicate that age affects the expression of DNMT1 and DNMT3B as an almost independent variable in respect of all other variables evaluated.