Adipsin Is Associated with Multiple Sclerosis: A Follow-Up Study of Adipokines 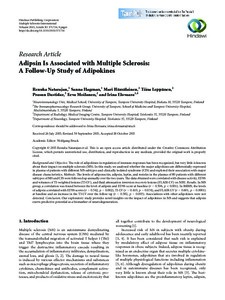 Background and Objective. The role of adipokines in regulation of immune responses has been recognized, but very little is known about their impact on multiple sclerosis (MS). In this study, we analysed whether the major adipokines are differentially expressed in plasma of patients with different MS subtypes and clinically isolated syndrome (CIS) and explored their association with major disease characteristics. Methods. The levels of adiponectin, adipsin, leptin, and resistin in the plasma of 80 patients with different subtypes of MS and CIS were followed up annually over the two years. The data obtained were correlated with disease activity, EDSS and volumes of T1-weighted lesions (T1-LV), and fluid attenuation inversion recovery lesions (FLAIR-LV) on MRI. Results. In MS group, a correlation was found between the level of adipsin and EDSS score at baseline (r = 0.506, p < 0.001). In RRMS, the levels of adipsin correlated with EDSS scores (r = 0.542, p = 0.002), T1-LV (r = 0.410, p = 0.034), and FLAIR-LV (r = 0.601, p = 0.0001) at baseline and an increase in the T1-LV over the follow-up (r = 0.582, p = 0.003). Associations with other adipokines were not detected. Conclusion. Our exploratory study provides novel insights on the impact of adipokines in MS and suggests that adipsin exerts predictive potential as a biomarker of neurodegeneration.