Seeing with special requirements: visual frictions during the everyday 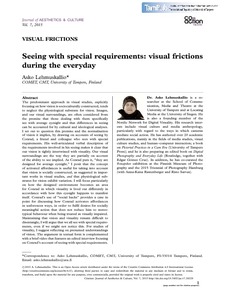 2015 A. Lehmuskallio. This is an Open Access article distributed under the terms of the Creative Commons Attribution 4.0 International License (http://creativecommons.org/licenses/by/4.0/), allowing third parties to copy and redistribute the material in any medium or format and to remix, transform, and build upon the material for any purpose, even commercially, provided the original work is properly cited and states its license.

The predominant approach in visual studies, explicitly focusing on how vision is socioculturally constructed, tends to neglect the physiological substrate for vision. Images, and our visual surroundings, are often considered from the premise that those dealing with them specifically see with average eyesight and that differences in seeing can be accounted for by cultural and ideological analyses. I set out to question this premise and the normalisation of vision it implies, by drawing on accounts of seeing by Conrad, a friend and colleague who sees with special requirements. His well-articulated verbal description of the requirements involved in his seeing makes it clear that our vision is tightly intertwined with visuality. Our visual surroundings are the way they are partially on account of the ability to see implied. As Conrad puts it, “they are designed for average eyesight.” I posit that the concept of activated affordances is useful for taking into account that vision is socially constructed, as suggested in important works in visual studies, and that physiological substrates for vision exhibit variation. I will focus particularly on how the designed environment becomes an area for Conrad in which visuality is lived out differently in accordance with how this eyesight happens to manifest itself. Conrad’s use of “social hacks” provides a case in point for discussing how Conrad activates affordances in unforeseen ways, in order to fulfil desires for socially meaningful action that does not reduce him to stereotypical behaviour when being treated as visually impaired. Maintaining that vision and visuality remain difficult to disentangle, I will argue that we all see with special requirements, even if we might not notice this. For studies of visuality, I suggest reflecting on presumed understandings of vision. The argument in textual form is complemented with a brief video that features an edited interview focusing on Conrad’s account of seeing with special requirements. It is supported with visualisations representing an attempt to render aspects of his seeing. Instead of purporting to visualise exactly how he sees, I intend the imagery to provoke reflection of seeing as a complex process, mediated via our ability to see and by the social construction of what to see.