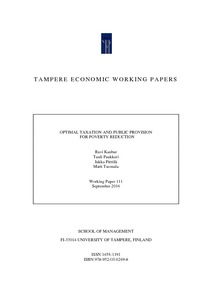 The existing literature on optimal taxation typically assumes there exists a capacity to implement complex tax schemes, which is not necessarily the case for many developing countries. We examine the determinants of optimal redistributive policies in the context of a developing country that can only implement linear tax policies due to administrative reasons. Further, the reduction of poverty is typically the expressed goal of such countries, and this feature is also taken into account in our model. We derive the optimality conditions for linear income taxation, commodity taxation, and public provision of private and public goods for the poverty minimization case, and compare the results to those derived under a general welfarist objective function. We also study the implications of informality on optimal redistributive policies for such countries. The exercise reveals non-trivial differences in optimal tax rules under the different assumptions.