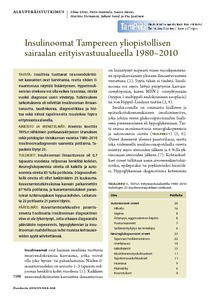 RESULTS: We found 23 iNET cases corresponding to an incidence of 0.7/million/year. All had neuroglycopenic symptoms and 83% had autonomic ones. The median diagnostic delay (from first symptoms up to diagnosis) was 25 months. Preoperative imaging found the tumor in 87%. Twenty-one out of 22 patients who underwent surgery recovered completely.

CONCLUSIONS: Despite improved imaging the diagnostic delay of iNETs remained unchanged. Hypoglycemia and insulinoma should be considered as a cause of unspecific, symptomatic attacks.