Association of Matrix Metalloproteinases -7, -8 and -9 and TIMP -1 with Disease Severity in Acute Pancreatitis. A Cohort Study 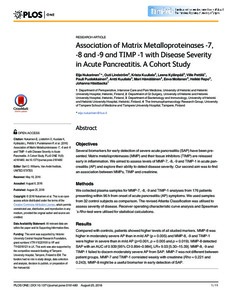 Several biomarkers for early detection of severe acute pancreatitis (SAP) have been presented. Matrix metalloproteinases (MMP) and their tissue inhibitors (TIMP) are released early in inflammation. We aimed to assess levels of MMP-7, -8, -9 and TIMP-1 in acute pancreatitis (AP) and explore their ability to detect disease severity. Our second aim was to find an association between MMPs, TIMP and creatinine.
Methods

We collected plasma samples for MMP-7, -8, -9 and TIMP-1 analyses from 176 patients presenting within 96 h from onset of acute pancreatitis (AP) symptoms. We used samples from 32 control subjects as comparison. The revised Atlanta Classification was utilised to assess severity of disease. Receiver operating characteristic curve analysis and Spearman´s Rho-test were utilised for statistical calculations.
Results