Mothers screening for malnutrition by mid-upper arm circumference is non-inferior to community health workers: results from a large-scale pragmatic trial in rural Niger 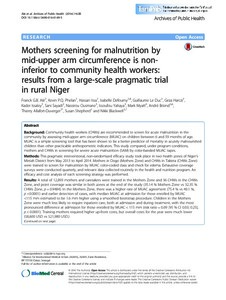 Community health workers (CHWs) are recommended to screen for acute malnutrition in the community by assessing mid-upper arm circumference (MUAC) on children between 6 and 59 months of age. MUAC is a simple screening tool that has been shown to be a better predictor of mortality in acutely malnourished children than other practicable anthropometric indicators. This study compared, under program conditions, mothers and CHWs in screening for severe acute malnutrition (SAM) by color-banded MUAC tapes.
METHODS:
This pragmatic interventional, non-randomized efficacy study took place in two health zones of Niger's Mirriah District from May 2013 to April 2014. Mothers in Dogo (Mothers Zone) and CHWs in Takieta (CHWs Zone) were trained to screen for malnutrition by MUAC color-coded class and check for edema. Exhaustive coverage surveys were conducted quarterly, and relevant data collected routinely in the health and nutrition program. An efficacy and cost analysis of each screening strategy was performed.
RESULTS:
A total of 12,893 mothers and caretakers were trained in the Mothers Zone and 36 CHWs in the CHWs Zone, and point coverage was similar in both zones at the end of the study (35.14 % Mothers Zone vs 32.35 % CHWs Zone, p = 0.9484). In the Mothers Zone, there was a higher rate of MUAC agreement (75.4 % vs 40.1 %, p <0.0001) and earlier detection of cases, with median MUAC at admission for those enrolled by MUAC <115 mm estimated to be 1.6 mm higher using a smoothed bootstrap procedure. Children in the Mothers Zone were much less likely to require inpatient care, both at admission and during treatment, with the most pronounced difference at admission for those enrolled by MUAC < 115 mm (risk ratio = 0.09 [95 % CI 0.03; 0.25], p < 0.0001). Training mothers required higher up-front costs, but overall costs for the year were much lower ($8,600 USD vs $21,980 USD.).
CONCLUSIONS:
Mothers were not inferior to CHWs in screening for malnutrition at a substantially lower cost. Children in the Mothers Zone were admitted at an earlier stage of SAM and required fewer hospitalizations. Making mothers the focal point of screening strategies should be included in malnutrition treatment programs.