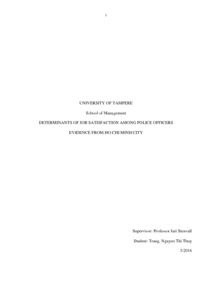 A prospective analysis was completed on 200 Police officers who were selected, using convenience sampling, from a population of 230 personnel at the departments. The researcher carried out analysis into the influence of autonomy, job stress, commitment, supervisor feedback, Perceived Organizational Supports and peer cohesion on job satisfaction among the officers.

Regression analysis revealed the following findings. First, job stress had negative and non-significant relationship with job satisfaction. Second, autonomy, commitment, supervisor feedback, Perceived Organizational Supports and peer cohesion had moderately positive significant influence with job satisfaction. The author recommends that leadership of Police administration should pay much attention to the psychological and physiological needs of their police officers to improve upon the job satisfaction among the officers.