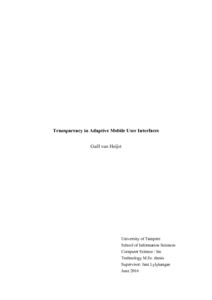 User interfaces that enable us to use complicated systems have become omnipresent. Being it through desktop, tablet or mobile devices, a great deal of our interactions with interactive systems is perceived through graphical user interfaces. One of these user interfaces is the adaptive user interface, which adapts according to a user s interactions. This type of interactive system keeps track of a user s actions through a personalized user model. Users can experience great advantages from having personalized user interfaces: imagine different contexts being triggered depending on certain situations, all with great ease of access. Nevertheless, users will perceive these changes differently. In order to communicate these changes in an effective way, certain ways of transparently guiding the user have been proposed.