Transmission of Smoking across Three Generations in Finland 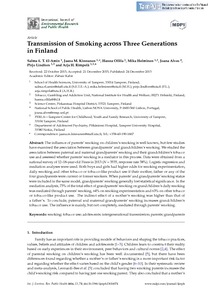 International Journal of Environmental Research and Public Health 13 1
74
This publication is copyrighted. You may download, display and print it for Your own personal use. Commercial use is prohibited.

© 2015 by the authors; licensee MDPI, Basel, Switzerland. This article is an open access article distributed under the terms and conditions of the Creative Commons by Attribution (CC-BY) license (http://creativecommons.org/licenses/by/4.0/).