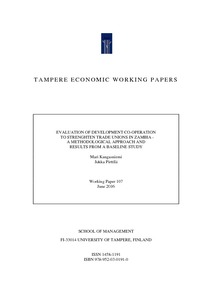 This study analyses a baseline dataset collected for an evaluation of a co-operation project that assists trade unions in Zambia to boost their activities. The data were collected from 51 establishments to study attitudes towards unions, working conditions and the views of employers and trade union representatives on each other. The results show that employees have, by and large, positive views on unions but turning to unions when there are problems is not particularly common. Wages are often considered to be too low and assumed to be lower than those of similar individuals elsewhere or even in the same establishment. Regression analysis shows that having positive views on unions per se has a positive association with satisfaction and negative correlation with resign intentions. Union membership, however, seems to be correlated with employees being more discontent with their wages in some instances, though the direction of causality is unclear.