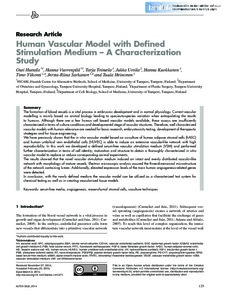 The formation of blood vessels is a vital process in embryonic development and in normal physiology. Current vascular modelling is mainly based on animal biology leading to species-to-species variation when extrapolating the results to humans. Although there are a few human cell based vascular models available, these assays are insufficiently characterized in terms of culture conditions and developmental stage of vascular structures. Therefore, well characterized vascular models with human relevance are needed for basic research, embryotoxicity testing, development of therapeutic strategies and for tissue engineering.
We have previously shown that the in vitro vascular model based on co-culture of human adipose stromal cells (hASC) and human umbilical vein endothelial cells (HUVEC) is able to induce an extensive vascular-like network with high reproducibility. In this work we developed a defined serum-free vascular stimulation medium (VSM) and performed further characterization in terms of cell identity, maturation and structure to obtain a thoroughly characterized in vitro vascular model to replace or reduce corresponding animal experiments.
The results showed that the novel vascular stimulation medium induced an intact and evenly distributed vascular-like network with morphology of mature vessels. Electron microscopic analysis assured the three-dimensional microstructure of the network containing lumen. Additionally, elevated expression levels of the main human angiogenesis-related genes were detected.
In conclusion, with the newly defined medium the vascular model can be utilized as a characterized test system for chemical testing as well as in creating vascularized tissue models.