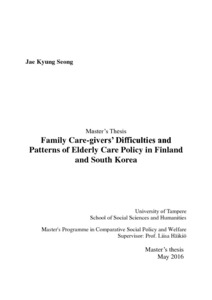 It was found that in Finland, informal care by family care-givers has been developed along with policies formalizing informal care and public-private partnership is pursued to provide elderly care, emphasizing the elderly s participation in social activities and independent living. The traditional meaning of universalism which stressed common access to public care services regardless of individuals income and capabilities has been changed in the area of elderly care in Finland. The elderly care system in South Korea has been transformed from familism originated from Confucianism to the system which emphasizes public responsibility, replacing informal care with formal care by public insurance. However, formalization of informal care by family care-givers is not well developed and building partnerships with other actors is weak in the elderly care under the influence of Confucianism. The culture-specific features in the two countries have been changed over time and they continue to have impact on the elderly care system.