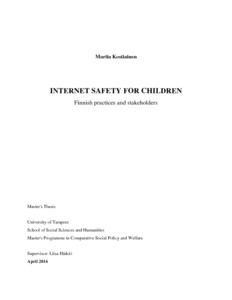 Internet has become a big part of our lives. It provides a lot of opportunities, at the same time exposing its users, and children in particular, to new risks. Rapid technological development, together with growing accessibility to the Internet, requires regulatory and preventive actions to be taken in order to deal with those risks adequately. Scholars debate on the account of who has the authority and competence to take up on these actions. Among professionals of the Internet governance it is acknowledged that, because of the nature of the Internet, it cannot be regulated by only one body, but for achieving most effective results, its governance should involve multiple actors who have a stake in these matters. Furthermore, technological development brings along certain conceptual changes, such as different vision of the risk itself. Hence, addressing the issue demands new forms of governance where the state might not have the traditional leading role.

This thesis gives an overview of Finnish actors and practices in the field of online safety for children. It also provides an analysis of discourse among Finnish experts around the topic of children s online safety, with the focus on cooperation between various actors. Experts from five organizations are interviewed for the purposes of this research: National Audiovisual Institute, Mannerheim League of Child Welfare, Save the Children Finland, Microsoft, and EU Kids Online Finland. They represent different groups of stakeholders and work with online safety from different perspectives. Semi-structured interview is used as research method for collecting data, and discourse analysis in combination with multi-stakeholder approach are applied to analyze the data.

One of the very important findings of this research is the difference in how online safety is viewed by Finnish actors in contrast to the general discourse around the topic. This research has also identified the most common ways of cooperation between Finnish stakeholders: discussion, joint actions and funding. Contributions of civil society (as individual impact) and international organizations were also underlined as important components among the ways of cooperation. Among other actors, this research was primarily interested in the role of the state. Based on the findings of this research it is possible to conclude that Finnish state is in a rather pro-active role in the matters of education in general and online safety in particular. Finnish practices often present interesting cases which deserve to be spread and applied in other countries worldwide.