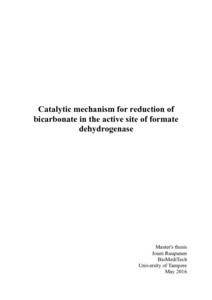 Formate dehydrogenases (FDHs) are a set of mostly homodimeric oxidoreductases that catalyze the oxidation of formate to carbon dioxide with the concurrent reduction of NAD+ to NADH. These enzymes are common to methylotropic yeasts and bacteria in which they are vital in the catabolism of methanol and methane. FDHs catalyze relatively simple hydride transfer reaction in which formate donates a hydride to the C4N atom of the nicotinamide ring of NAD+, yielding carbon dioxide and NADH. During the recent decades, FDHs have been utilized in coenzyme regeneration systems that produce NADH which would be expensive to manufacture by conventional chemical synthesis. Another promising application of FDHs is carbon fixation from the atmosphere and the oceans using the reverse reaction, the reduction of carbon dioxide to formate. Recent experimental evidence suggests that formate dehydrogenases are able to reduce bicarbonate to formate as well.

The aim of this thesis was to develop a model for the catalytic mechanism for the reduction of bicarbonate in the active site of FDH from bacterium Pseudomonas sp. strain 101. For this purpose, three different initial models for classical molecular dynamics simulations were constructed. The PDB structure 2NAD was used as a basis for all models. In addition to the main simulation which included bicarbonate and NADH in the active site, two reference simulations were performed as well. In the first one, formate and NAD+ were simulated in the active site to ensure that the results would be comparable to earlier computational studies on the same subject. The purpose of the second reference simulation was to observe if carbon dioxide could react to formate in the presence of NADH.

It was discovered that bicarbonate settled in a conformation ideal for hydride transfer during the simulation. However, the process itself was a time-consuming process, taking up to 3 nanoseconds of simulation time. Experimental results seemed to support this observation. Based on the optimal conformation of bicarbonate, a model for the catalytic mechanism was developed. In the model, the hydride donated by NADH would form a covalent bond to the carbon atom of bicarbonate, resulting in a surplus of electrons within the molecule. This would cause the complex formed by bicarbonate and the hydride to break into formate and hydroxide ions. In the reference simulation with formate the optimal conformations for hydride transfer were not observed, but this was probably due to the inaccuracies of the classical molecular dynamics method described in earlier studies. Carbon dioxide seemed to have a destabilizing effect on the active site. The reverse reaction could still be possible as carbon dioxide occasionally drifted close to the hydride of NADH bound to the C4N.