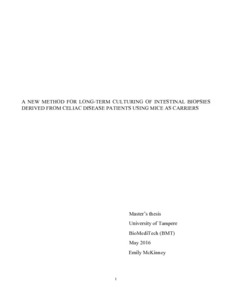 Celiac disease (CD) is a complex disorder with no bona fide animal model that would exhibit all the features of the disorder. The small-intestinal mucosal biopsies commonly used to study the disease present a limiting factor, which is the survival of the specimen for only 24-48 hours. The goal of this project was to develop a system to support the biopsy using mice as carriers for a long-term culture and to subsequently use this system to test potential therapeutic compounds. We obtained biopsies from CD and control patients and implanted them under the skin of athymic mice for the duration of 8 days. To determine if certain key features of CD were maintained in the biopsy during the extended incubation time, we performed various immunofluorescent stains. We found abundant, well developed vessels in the control and reduced size and functionality in the CD vessels, consistent with the situation in actual patients. We also confirmed the presence of B-cells, and found evidence of IgA/transglutaminase 2 colocalization, both important features of the disease. To test the effectiveness of different compounds at ameliorating the decreased vascularization seen in CD samples, we applied statin class drugs, shown to increase angiogenesis, to HUVEC cells in the presence and absence of celiac disease-specific transglutaminase 2 targeting autoantibodies. We found that the compound α-amino-γ-butyrolactone hydrobromide had the ability to accelerate the growth of the HUVEC cells even in the inhibiting presence of the CD autoantibodies, while the drug Atorvastatin show variable and inconclusive results. We proceeded with the application of both of these compounds to mice implanted with CD and control biopsies. The samples from these final mouse experiments have yet to be analyzed but we feel confident that our organ culture model provides a valid option for extending the life of human biopsies as well as an opportunity to test novel compounds.